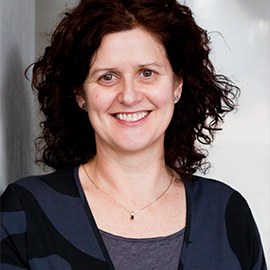 Julie McLeod is a Professor in the Melbourne Graduate School of Education and Pro Vice-Chancellor (Research Capability) at the University of Melbourne. She has previously been Deputy Director of the Melbourne Social Equity Institute, former co-editor of the journal Gender and Education (2012-16) and is currently a co-editor of the History of Education Review. Her research is in the history and sociology of education and is guided by a focus on how identities and social possibilities are differentially shaped by school experiences.

Julie began her career as a secondary school teacher (English and English as a Second Language), following a Bachelor of Arts honours degree (English and History) and a Dip Ed, both at the University of Melbourne. She worked in high schools in the western suburbs of Melbourne and in north and inner London, in language and migrant reception centres, and in adult and community education. During this time Julie began a Masters in Education (curriculum history), followed by a PhD (historical sociology of feminism and education). Her first academic position was in Women’s Studies at Deakin University. Following the award of Postdoctoral Fellowship in the Faculty of Education at Deakin, she worked there until 2007 when she moved to the University of Melbourne.

Julie’s research in the history and sociology of education encompasses curriculum, youth, gender, and processes of inequality and difference. Her work has investigated young people’s pathways through school, their social values and navigation of future roles and identities, citizenship and social inclusion/exclusion, school values and ethics, socio-spatial marginalisation, youth wellbeing, space and materiality of schooling, gender relations and educational reforms to redress inequalities. She has also built a series of historically focussed projects that explore the travelling ideas of educational expertise on adolescence and youth identities, alternative and progressive schooling, memory and oral history of schooling, curriculum projects and citizenship formation, and genealogies of feminism.

Theoretically and methodologically, Julie’s work is characterised less by adherence to specific hero theorists and more by a critical engagement with a range of theoretical debates that help illuminate particular problems and dilemmas. Her intellectual formation has been shaped by feminism and by the poststructural turn evident in Foucauldian and genealogical studies, but not to the exclusion of other theoretical traditions and emerging agendas.

Julie currently holds an ARC Future Fellowship for the project Youth Identity and Educational Change in Australia since 1950: Digital Archiving, Re-using Qualitative Data and Histories of the Present. This comprises two research strands: a historical study of social science research on youth and educational inequality, and Making Futures, a multi-site qualitative, longitudinal ‘born digital’ study of young people in the senior years of secondary schooling and into the world beyond.

Julie contributes to the discipline through editorial and peer reviewing, research grant assessing and thesis examination, as well as through leadership and participation in professional associations, and mentoring of doctoral and early career researchers.

Editor of the international journal Gender and Education 2012-2016

In her role as Deputy Director of the Melbourne Social Equity Institute, she leads and contributes to numerous cross-university initiatives, such as the MSEI Doctoral Academy, and collaborations between the university and external and community organisations.

Australian Association for Research in Education

International Standing Committee on the History of Education

As both a sole investigator and a member of research teams:

Academy of Social Sciences in Australia
Philanthropy and public culture: The Carnegie Corporation of New York in Australia, workshop grant, with Kate Darian-Smith (University of Melbourne) and Glenda Sluga (University of Sydney)
2009

ARC Discovery Grant
Young women negotiating from the margins of education and work: towards gender justice in educational and youth policies and programs. With Jane Kenway, Alison Mackinnon and Andrea Allard
2002–2004

Commonwealth Department of Education, Training and Youth Affairs: Research consultancy
Factors influencing the educational performance of males and females in school and their initial destinations after leaving school. With Jane Kenway and Cherry Collins
1999–2000